A funny thing happened on the way to wherever I'm going 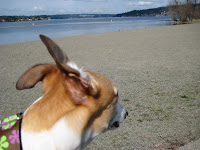 The pooch and I strolled past a neighborhood playground today, and a woman with a distinctive look caught my eye. Once I focused and processed, I quickly picked out her husband and son from the sunny-afternoon crowd.

I don't personally know this family — not once in 5 years have I seen them around the 'hood — but they'd made a lasting impression when I encountered them last March in the clinic's lobby. For 40 minutes one day (I was there to discuss starting IVF #2) I listened to the cute rocker-chick woman dissect her stims progress for her hat-and-shades-indoors-wearing, Black.berry-fixated hubby, who sat next to their adorable hat-indoors-wearing, Game.boy-fixated son. She had just 3 follicles developing, 1 way ahead of the others, and they were there to discuss canceling the cycle.

I kept on walking at first, thinking just "Huh. Small world." But then something compelled me to stop and turn around for another peek. (This was an excellent time to have a happy-to-sniff-every-inch-of-the-ground dog along.)

Can you guess what I wanted to know?

In that first moment of reconnaissance, the woman's hands were stuffed into her hoodie's kangaroo pockets, making it difficult to immediately tell whether she was pregnant. The next moment she was applauding her son's jungle-gym prowess, and the answer appeared to be "Not visibly so." I felt disappointed for her and sent a couple of stranger vibes — "Good luck with any future cycles! Or whatever you've got going on!" — across the park.

Well, then I saw the woman's ears perk up. She swiftly marched to the sidelines of the playground . . . toward what the slo-mo scene maker in my head eventually identified as a double stroller. For some reason the real-live babies option hadn't even occurred to me! I spied just long enough to see the mommy scoop up one fussy baby and stroke the second as her men rushed over to help with the cooing.

I was startled, and yes, it gave me quite the where's-mine pang. (This was an excellent time to be wearing sunglasses.) But as I turned away and steered us toward the wide-open beach — my furry kid's playground — I took a deep, cleansing breath and broke a slightly teary, but deep-down genuine, smile.

It felt good to see that "The Big It" had worked for somebody who's using my neighborhood park, walking my neighborhood streets, driving my routes to wherever she needs to go, standing in my check-out lines, living her life where I live mine. And in my world, that . . . has got to be that.
Posted by Lisa at 5:23 PM

Labels: Furbaby, Healing, The May Experiment, What Is

That's gotta to feel like one of those double edged swords type of feelings. I hope you're feeling OK after the encounter.
*HUGS*

I had something similar happen to me when I was at my old RE's office. He shared with a high risk OB and there was a couple there who looked like any other couple who were expecting - except the nurse for my RE greeted them because she knew them. It was quite the punch to realize that it had worked for them. I was at the office because I had just had a miscarriage.

But, I also know now that it does feel good to be happy for someone who was in your position and succeeded.

It is reassuring to know that our own failure doesn't make us bitter enough to wish it on a fellow infertile.

What a beautiful post. I'm so glad that you are finding peace on this road you are traveling.

You've come a long way ... I'm proud to know you. It took me nearly forever to become glad for someone who got pregnant while I didn't. Some ideas are harder to get used to than others...

Coming from LAFCA. I thought your post was very enlightening. What is in store for the women we encounter at the clinic? We meet them, or just exchange brief glances. And once we end our clinic life, they are gone. But not really gone. They are out there too.

These encounters are difficult. I just found out that someone I was helping cope with IF is now pregnant. I feel very happy for her but it is hard. I am glad you feel some peace with it.

Definitely a double edged sword. I think it would give me hope and break my heart just a little bit.

Your post just made my stomach flip-flop. I can certainly relate to those moments! Hope and disappointment and jealousy and satisfaction all wrapped into one.

Thank you for your blog and letting me know I'm not alone. Your experience echoes what it's like for me right now as a newcomer to the infertility blog scene - I'll click on a so-called infertility blog only to discover baby pictures. Happy for them, but...

Love this post! I'm glad you picked it. Your writing is so touching and gives me chills every time.
*HUGS*

Popping in from the crème de la crème list.

A beautiful post. I have no qualms about having mixed emotions when 'normal' people have children. When a fellow traveler finally has the longed for child I would like to think I am only happy for them. But, I have to admit, a tiny part of still says "me too!".