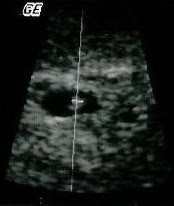 I'm hanging on by a thread, and — right now, bless its little heartbeat — the baby is still hanging out.

I went in a day early for my ultrasound because I woke up to red blood this morning. Strange thing is I usually keep the light off for my 5:45 bathroom trip. But today I flipped the switch and then flipped my lid to see a grape-sized red clot and some red flow. That soon turned to pink mucus and then, later, to the brown spotting and steady cramping I'm still sporting this afternoon.

My RE fit me in at lunchtime to see what's what. DH was able to meet me at the clinic for the ultrasound.

Good news first is that the heartbeat is at a healthy 125 bpm. I'm at 6w4d today, so everyone was pleased with that reading.

The rest of the news is that both the sac and the fetus are measuring behind. Also, the sac is located fairly low in the uterus. Lower than they normally see but not so low as to say that in itself is "bad."

The baby measures at 5w5d, and the sac was 5.7 something. I remember thinking "She doesn't mean 5-weeks-7-days because that would be 6 . . ." and so I assumed she meant 5.7 millimeters, but I honestly don't know more about this detail because I asked one of the many other questions populating my head at the same time.

Frankly, the RE was concerned to see the smaller sac, sac-to-fetus ratio*, low uterine placement, and bleeding all in one package: aka my "less than pristine uterus." (Yeah, she said that, but I knew what she meant and it's true — that there uterus has seen lots of action!) At one point she zeroed in on an enlarged vessel (it had its own pulse), but she found no clot, hematoma, or any other physically viewable cause for the bleeding.

Officially, the RE has deemed this a threatened miscarriage. So we've entered another round of wait-and-see. I'm to go back in anytime the bleeding picks up, but if it doesn't we'll meet next Wednesday for another look-see.

I know it's not supposed to mean anything, but darned if my pregnancy symptoms don't seem to have vanished.

*Do not go looking for information about THIS with measurements like mine.
Posted by Lisa at 2:15 PM

Labels: Appointment Report, TMI, What Is

Hang on, little one!

Prayers and hugs for you.

I hope your little one keeps hanging tight. I'll keep you in my thoughts and hope the next week is uneventful.

I will send you all the best, most positive thoughts. I so hope that this turns out well. It is your turn to have a good outcome.

Bless that little heartbeat. Grow bubba grow. Sorry that you're back in the wait and see seat.

I am so sorry to hear abt the scare. Crossing my fingers and praying that your little bean stays put!

Hugs and prayers for you. Sending you lots of good vibes!
Hugs,
-D

I'm holding my breath. Praying for you and your little baby.

Stay with your mama, little baby. Hang in there, Lisa. Sending sticky baby vibes and tons of positive thoughts your way.

Holding my breath, and hoping as hard as I possibly can that your little one holds on tight.

May God Bless that Heartbeat for 40 weeks and a long, healthy lifetime after that. Sending you positive thoughts and prayers.

I'm so sorry about the wait and see situation your in. I'm keeping my fingers crossed for you babe!