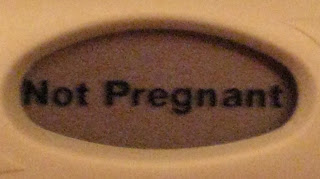 The poor little "Not Pregnant" ones never seem to get photographed, so I thought I'd make mine feel loved.

(To digress: Does anyone else chuckle a little at photos of "Pregnant" digitals? Am I the only one who doesn't see the point of that particular pic?!)

As I think I mentioned, I opted out of officially following my HCG levels down. I decided I didn't need the hassles related to continued fertility-clinic visits, such as . . .
Last week was a veritable bust for me. After my ER visit, I experienced some heavy clean-out bleeding, and I stayed on meds for a few days to deal with a crushing hormonal headache and its accompanying nausea. Somehow I powered through one of my year-end projects and finished that on Thursday. (Did I do a good job? Well, I couldn't judge it AT ALL, but nobody has said anything!)

Friday was my first day totally drug, headache, and blood free. A relief that then opened the door to my starting to "feel." Oh boy. I spent that day doing nothing but feeling everything to the core, barely able to move. DH and I had dinner reservations and tickets to the Nutcracker that night, and I managed to pull myself together to go. While dressing, I really worried I might lose it at any number of points in the evening. But it was good to get out and I did well. The swarms of adorable costumed children (both in the audience and onstage) made me smile, as did the requistite dozens of glowing, belly-rubbing preggos who'd bought tickets for the same damn night. It helped that attendance was greatly reduced due to the weather and DH and I had several rows of a nosebleed-box-seat section to ourselves. The lovely wine we had with dinner helped too.

I spent Saturday alone with thousands of other sardines buying groceries, hitting the discount stores, mailing packages, and returning library books (okay, nobody else was at the library). And since Sunday, I've been doing my best to catch up on my other year-end work project. It's moving along. Not as quickly as is typical. But I am doing the best I can with it.

Sunday night brought another spate of cramping and bleeding. Monday morning, I felt like the HCG was gone. Not sure a person can tell, so I used the digital test pictured up top — along with a pink-lined one that was taking up too much space in the cabinet — to see what I'd see. I learned in words and a stark-white testing area that I'm in the clear. The hormones left my system about 2 weeks faster than with the June miscarriage, and that makes sense since I was about 2 weeks farther along with that pregnancy.

Here's to regrouping and figuring out to move on as 2009 approaches. Glad the HCG is out of your system. Take care of yourself. Perhaps we'll end up cycling at the same time next time? I'll keep an eye out!

"Strength is born in the deep silence of long suffering hearts; not amid joy." - F.H.

And somehow you will find the strenght to move forward and figure out the direction.
My deepest thoughts and prayers.
*hugs*

Proximity to grief brings the best, worst, and most painfully awkward out of people.

While I know that I do not know the most appropriate thing to say, my healing recovery vibes do and I'm sending lots.

Hey, I just started reading your blog, but I wanted to say I'm glad the HCG is out of your system. YOu are right, no one ever posts the negatives! I took one last week, and it was still postive, two weeks after my D&C. Kind of frustrating. Anyway, take care of yourself. 2009 will be a much better year!

Only in this whacked out world of infertility can a negative HPT after a miscarriage be a good thing. I always found it really ironic when I celebrated the HCG dropping below the magic line.

I also don't know if I would ever get the digital read out thingies. I still like the challenge of remembering whether there is supposed to be one line or two. Call me old school that way.